In ruins, the fortress waited its liberators for three years. On July 24, the silence fell on that frontline in the rear on the Bug. In the 1950s, thorough work started there to discover all there was to learn, and this later opened up an extraordinary page in the history of the recent war. This feat may not be so grandiose against the backdrop of the war as a whole, but the fighting spirit displayed is unbelievable. The ruins and walls spoke of it, so did the brickwork of the casemates, fired by the many-day-long conflagration. The anonymous inscription on the western barrack wall reads, “I am dying, but I do not surrender. Farewell, Motherland! 20/VII-41”. The world Motherland and the date of the battle were dearer to the soldier than even his own name. Although anonymous, he became immortal.
The Historic Order No 1 was discovered under the ruins. Worked out in the hail of bomb and shell fire it named the leaders of the defense. Gradually, those who remained alive, along with sources found in the archives, told us about the many defenders of the Brest fortress. Their heroic deed was immortalized by the writer S.Smirnov, and the Soviet artists P. Krivonogov, Ye. Zaitsev, and N. But.
One of the artists, a Byelorussian graphic artist, Pyotr Durchin has been dealing with the theme of the heroic defense for more than twenty-five years now. To get to know those whom we call legendary today, he had to do some research, seeking his heroes out in different places. When he worked on their portraits he had long confidential talks with their relatives, and kept up a permanent correspondence with them. His greatest reward was when the defenders of the fortress began to call him their own artist. In creating his characters, Durchin tried to get the feel of the moral and psychological situation in June 1941. Awakened by the sunder and fire in the middle of the night, the soldiers had to withstand superior enemy forces. They were ready to fight to their last breath, and this was their immediate answer to the eternal question about the value of life and attitude towards death. Day after day, amidst incessant fighting, with no sleep, water or food, the defenders managed to accomplish what was far beyond man’s physical abilities. This was only due to their tremendous strength of will. The notions Brest and Motherland became one and the same for them. Here, in the fortress, soldiers of more than thirty nations fought to the death for their one and only Motherland. Many defenders of the fortress managed to break through to the front, and continued their antifascist struggle there, or in partisan detachments.
The portraits pained by Durchin from life (in pastel) are remarkably accurate. Sometimes, a person who looks quite ordinary will have a really heroic background. In the course of his work, he made up his mind to reveal the hero’s story. Thus, some graphic portraits grew into subject compositions (P. Gavrilv, R. Semenyuk). Durchin is working on the portraits of men and officers who were killed at the fortress. Is doing this, he uses photographs and gleans information from the reminiscences of witnesses and relatives. These lithographs were based on the same compositional and plastic principle. They reproduce the heroes’ best traits – their will power, courage and moral purity. One of the defenders, Ivan Dolotov, wrote to the artist, “Both Zubachev and Fomin were just like that in those days – concentrated, serene. You haven’t seen them alive, but you still managed to capture their nature. When I compare your portraits with what they were like in real life, I don’t find any discrepancy…”
The portraits in the present set of postcards are on display in the permanent exposition of the memorial complex “The Brest Hero Fortress”. They are just part of the artist’s great creative endeavour, for he is continuing to work on new portraits of the defenders of the Citadel. It would be a great honor for me now to inform you about some really legendary persons ,Brest fortress defenders . 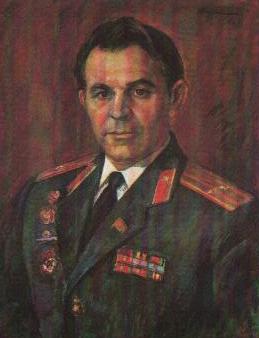 Pyotr Kotelnikov was born in the village of Bogoyavlenskoye, Penza region. At the age of 12 he was not only a witness to but also a participant in those fierce and tempestuous events that people here mention with great respect and pride even today. He became an orphan when he was still a child and grew up and went to school at children’s home. From there he came as a pupil to the musician’s platoon of the 44th rifle regiment. On June 22, he was awakened by a terrible roar, and all at once, together with the grown-ups, rushed to the weapons. But he wasn’t given a rifle and hurried to help one of the soldiers to put out the fire at the depot. Then the soldiers moved to the barrack basement of the neighboring 33rd rifle regiment. There he met young musicians of this regiment. From the very first hours of the war the boys found themselves right in the midst of events. They went on reconnaissance, brought charges, crawled to the river for water, doing their best to help the wounded and little children. On June 29, several soldiers decided to make a breakthrough and took the boys with them. “The POW camp in Biala-Podlaska, an escape that failed, Brest prison, starvation, beating and humiliation, escape again…” – that is how Pyotr Kotelnikov describes those days.
In 1946 Peter joined the Komsomol. In 1950, he became a service man. In 1956, he joined the Communist Party of the Soviet Union. For his participation in the defense of the Brest fortress he was awarded the Order of the Patriotic War, grade II, and for carrying out a mission in a friendly country – the Order of the Red Star. Nowadays Pyotr Koelnikov is Lieutenant-colonel in retirement and likes to be with young people. 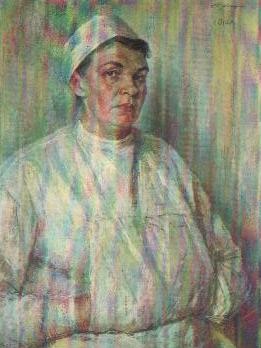 Raisa Abakumova was born into a worker’s family. In 1932, she graduated from the Orel medical school and worked as a nurse in the operating theatre at the regional hospital. In October 1939, she was sent in the 125th rifle regiment as a doctor’s assistant. In Jun 1941, she was lieutenant of the medical corps, senior nurse of the 95th medical battalion. She lived in the fortress together with her 60-year old mother in the house at the Kobrinsk fortification. On June 22, at dawn, she was preparing to leave for the field exercise. When she heard the first explosions of the fascist bombs, she dashed to the hospital which was situated at the Volynsk fortification. All around her shells were blowing up, bullets were blowing up, bullets were whistling past and everything was on fire. She was wounded soldiers falling everywhere. Her medical bag was soon empty. Then she headed for the Eastern fort. There Abakumova organized an improvised hospital. The number of the wounded kept growing. On June 29, an open party meeting was held at the fort, and, together with all those present, Abakumova voted for the decision to flight to the last. And they fought. They still remember this fearless woman, the heroes of the fortress, those whose lives she had saved.
Raisa Abakumova was awarded the Order of the Red Banner. Shе has been a communist since 1959. At present, she lives in Orel and works hard to bring up young people in a spirit of a heroism and patriotism.
In conclusion I would like to say that finding out some peculiarities of war period reflection is of great importance and I came to know lots of new facts concerning Brest defenders.
The materials of the project paper should be used by the students while getting ready for war period events description especially in the year of 65 anniversary of the Second World War.