We live in a happy country in happy time. We can live and enjoy our lifestyle. And every year we remember about the great date which gave us a chance to live. That date is the 9th of May. The Victory Day is the most important holiday in our country. And this year is the 65th anniversary of our great victory in the Great Patriotic War. The topic of our project work is becoming more and more actual as the Victory Day brings closerWe believe that our work will attract pupils attention and will make them think about that hard war years and appreciate the victory of our grandfathers at its true value.

Nowadays, people know more about the great deeds of our soldiers. Their contribution to the victory of our country is considerable. But we sometimes forget about other people who work during the war in the rear. And about young children who join battle with fascists. Therefore, it is important to show their contribution and understand the reasons that cause such selfless labour and heroic actions of our nation.

The aim of this work is to present by means of A. Fadeev’s book “Molodaya gvardiya” that pupils and young people have done a lot during the war and their deeds can be called valiant. We want people remember their heroic names so that no one can be forgotten.

The objects of the investigation:

During the research we used such methods of investigation as analysis, productive research method, historical and comparative method.

The subject of the investigation is the pupils and youth’s deeds during the Great Patriotic War.

June 22 in 1941 is the most tragical day in the history of our country. The fascist troops invaded our motherland. Thousands of heavy guns shot at our frontier posts, headquarters, airdromes and peaceful people. The head of our country asked people “to give resolute rebuff to the German aggressors”. The Minister for Foreign Affairs V. Molotov said the words that were the people’s motto during the Great Patriotic War. “Our cause is right. The enemy will be crushed. We will gain a victory.”

Our troops were taken unawares. The German aggressors began their attacks in the line of Moscow, Leningrad and Kiev. A lot of airplanes were destroyed, thousand people were killed and injured during the first day. The fascists occupied Baltic, Byelorussia, Moldavia, the bigger part of Ukraine. The situation was catastrophic. The German aggressors thought that they could occupy our country in a short period.

But they faced stubborn struggle and last-ditch defence. Russian soldiers fought against heavy odds. For example, Lieutenant A.V. Lopatin’s frontier post had been fighting with fascist troops for a month. Lieutenant I.I. Ivanov made the first ram attack in the history of the Great Patriotic War. When he had seen fascist bombers and had spent his ammunition, he attacked German bomber with propeller of his plane. Moreover, Russian pilots aimed their burning planes on the German troops and tanks.

The surprising success of German troops and frightening failure of our army brought people together. They understood that the fate of their motherland was at stake then. They didn’t want to believe that our country can be destroyed. The German troops killed civilian population, taunted children and women. Such behavior made our people fight with fascist tooth-and-nail and win the war.

There are a lot evidences of Soviet people’s selfless behavior. Many authors wrote books that were based on the real deeds. They wanted to raise the spirits of soviet soldiers and to inspire our nation.

A. Fadeev is one of the famous soviet writers, who wrote the novel “Molodaya gvardiya”. He tried to tell about heroic deeds of youth during the war. Young people didn’t want to stand apart. They want to struggle because they felt responsibility for their motherland. The war showed the ability of our nation to overcome all the difficulties, to determine the potential and best qualities in extreme conditions. The author wanted to reveal not only soldiers’ courage, valour, but he tried to attract our attention to the people in the rear. 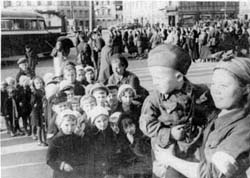 People in the rear changed their way of life and their mottoes were:

It was very hard for people to remove to another places. Evacuees left their houses, way of life, relatives. But it was necessary because our country was in need of workers, food and ammunition. Many families helped the evacuated people. They provided them with house and shared a crust of bread with unlucky people. Thousands of women, teenagers and old people went to the plants, developed the manufacture of tractors, grain harvester combines instead of their husbands, sons and brothers. They had been working for 12 hours a day. “Though it melted, freezed or rained, hundreds of people got very early to be in time for their work.” Their selfless labour helped to avoid famine and to increase output of defence production.

This book also shows us that many young people became volunteers and they were happy to participate in the war and defend their country. Children studied how to identify different arms, weapons. Some of them went to the war and became nurses and soldiers.Thus, Sergey Tylenin was a pupil, but he took part in two battles and killed several fascists. When German troops occupied Krasnodon, Sergey burnt their headquarters. A.Fadeev described how the youth created underground organization “Molodaya gvardiya”, whose aim was to dig out intelligence data, to stick leaflets, struggle with German aggressors. The participants of “Molodaya gvardiya” helped injured soldiers to pick up, released the group of prisoners of war, gathered and stole arms in the area of the battles. Ulya Gromova carried out work against levy of German troops and capture the youth in Germany. She burnt the unemployment exchange and all the files with names were destroyed.

Lyba Shevcova was one of the bravest girls in this partisan organization. She completed an army-landing course and radio operator’s course. So, she communicated with other partisan detachment. Lyba was rather pretty and easy-going girl. She got acquainted with German officers and found the important information.

There were three fighting detachments organised by “Molodaya gvardiya” on the roads in this district. The first detachment attacked cars with German officers. The second detachment attacked oilcars. The third group was headed by Sergey Tylenin and this group fulfilled the most dangerous and important tasks. On December 30 this detachment found out a German car with New Year presents. They attacked it and took all the presents. They needed money for the future large-scale operations and decided to sell the half of them. But it was their mistake and all members of the underground organization were caught by German policemen.

German soldiers beat unmercifully young partisans, tortured them. They cut a star on Ulya’s back. But young people didn’t give up and betray each other. They understood that German soldiers could kill them but they were true to themselves and their convictions.

We were amazed by their courage, will-power and complete devotion to our country. They did their best to prevent future forwarding of German troops and to hold them until the army of South front could move to Rostov.

So, why did the youth went to the war? Summing up the information we can single out such reasons:

We believe that our country during the war was the country of heroes because everyone did their best to resist the German army. People of different age, education, physical strength took part in the Great Patriotic War. They did their best in the rear and on the front line. Their general aim was to win the war and to deliver our country from fascists.

In conclusion, we would like to say that our generation is saved by our grandparents. We shouldn’t forget about it. It’s necessary to talk about the Great Patriotic War and it’s heroes. We wanted to attract teenager’s attention to the problems of war, peace, courage and selfless deeds.

This work has theoretical value as it shows heroism of the youth and reveals the reasons which cause it. We tried to point at real facts that were in the legendary book “Molodaya gvardiya” in order to prove that our country was the country of heroes during the war. That book told us about one city, but this selfless work and brave deeds were typical to the whole nation.

Talking about practical value of this work we can say that this material can be used during the discussions, lectures and talk about the Great Patriotic war. This year is the 65th anniversary of our great victory and this work can be used by teachers and pupils. It helps to raise patriotism and show pupils examples to follow.

As for us, during this work we used many recourses which helped us to extend our knowledge about the Great Patriotic war. We learned a lot of new information about the war and the heroic youth.

We believe that if teenagers of our generation know more about such selfless young people they will be more patriotic and courageous.