Objective: To understand the pain that moved the world during the Great Patriotic War, to remember heroes, held out, winning, offers hope to the people that gave birth to life and happiness, to show what should be left to the war in every family.

Many years have passed from that terrible war, thickets, overgrown trenches and craters, rose from the ruins of cities and villages, but the memory of that time does not go away from the heart. And now 65 years since Victory. People again and again returned to the memory of those distant, full of gravity and the great courage of the war years. Memory of War is a matter not only veterans, but the younger generation. War and victory - not only history, it is a fact of moral heroism of Soviet people, who took over the brunt of the fight against fascism, decently and courageously performed their sacred duty. The consequences of the last war and felt today. It is therefore very important to keep in memory what we know about war, about the participants of the war and the rear. We, especially students, need to ask the veterans about their past military life, learn about their exploits, to help them than we can. Gone is the decade since then, died away as the shots of the Great Patriotic War, but the memory of those stores deeds perpetrated every day all the long years of war.

1. Visit BOB neighborhood of our school.

October 4, 2009 in our school for the first time held an event called Retro - cafe, which was devoted to the Day of Older Persons. Our Retro Cafe WWII veteran, retired district. Gathered together, in close range, veterans congratulated each other on the occasion, recalled his younger years. Organizers of the event became a teacher-organizer Pashkova O.I. with the participation of the social teacher Sayfulin Z.M. Together, they congratulated the guests on the holiday, talked to them about youth, about the school years, the first teacher. Has competition rhymes for friendly table all together singing lyrical songs. And at the end of the event each visitor of our Retro Cafe left the wish school.

- Where survive? Tell us about the war.

- I have from childhood lived in the village. But when I was 11 years suddenly started the war. I had to throw the school. I'm there she studied class 3. And someone Class 4. And my husband in school have learned not exactly 5 classes. In war, it was difficult. On the battlefield, he came back without his right leg. But he survived. We have children in the war was very difficult. We are always not enough food. In the city of famine. In grocery stores, almost nothing. But do we still survived. And we are here.

- Do you think our youth could cope with those times?

- I think not. Because there was no such technology as it is now. There were these computers and cell phones. One of the young people of course tend to help us. For example, carry bags home from the store. Thanks for that. But someone does not notice us. Always before my eyes smoke and drink alcohol. It's not very nice, especially us veterans.

- What do you want our young people?

- Certainly happiness and health. To avoid drinking and not smoking. Listen to and respect their elders, have helped us in difficult moments and seconds. We are very grateful for all your help. 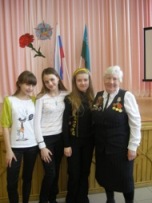 Was born in 1926. Feb. 11 in the Urals - the farm of Lenin - in the family of a blacksmith. Mother - Catherine G., father - Thomas G.. He graduated from the 7 classes. In 14 years - accounting clerk dairy farm. In 15 years - drilling exploration Mater. In 16 years - to the front to order, digging around Ufa (30 km. From Ufa), in the woods, driver and navozchik. As the distribution was in-aircraft regiment of istrebitelsky Barnaul, where he trained pilot. A week later, was ready to fly an airplane, ready for the front. They sent in bombarded, run by an English plane "Cobra" and American "Douglas". By night, in Novosibirsk, and from there went to the front. Orel-Kursk Bulge. He knew the marshals Zhukov GK and Rokossovsky. In Poland, lined tanks, artillery and infantry. Of the 18 people remained only 11.Nas replenished and sent on. He was released in three divisions. 1600000 died Auschwitz. In the city Aliev went to a German apartment, where there was a table full of food and soft bed. Paul Fomich like a lie down, but had to go on fighting. Done at Berlin 6 years, and then 30 years-plus working on the Komsomol of zinc and 30 years in Surgut, where he lives now. (Energy, 31 square meters. 42, tel. 24-16-30).

I sincerely want to congratulate you on the 65th anniversary of Victory over fascism. Let me express my deep respect for the courage and heroism, which gave future generations a world - an opportunity to live and enjoy life, and, of course, to wish you good health and long life.